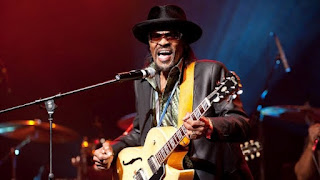 I don’t know how old I was when I first heard go-go. However, I do know it was love at first listen. And the man responsible for that “love affair” came right on time but also left us far too soon: The Godfather of Go-Go, Chuck Brown.

Though there’s not an exact point of reference, my earliest recollection of the Godfather’s music was the breakout hit, “Bustin’ Loose,” an infectious jam with a sound closer to mainstream "funk" than any other go-go song probably ever had. Yet, there was still something different that let you know this was something bigger than funk. This was a new sound in town, and the more you heard it, the more of it you wanted, from the thumping percussion to the blaring horns; the syncopation, the call and response, and even that gravelly voice riding over the beat telling us that, "You got to give a lot just to get what you need sometimes...." Oh yeah, we wanted more of this, and boy did we get it!

Although Chuck had been “movin’ and groovin’” in the world of jazz, blues, and Latin music long before many of us even came into this world, his creation of go-go gave Washington, D.C. something that no other music had—an identity; something to call our own; a sense of pride. Even through the ups and downs the city faced over the years from falling mayors to the crack epidemic to gentrification, go-go remained consistent, like a life-long friend and gave us a sense of “home.” 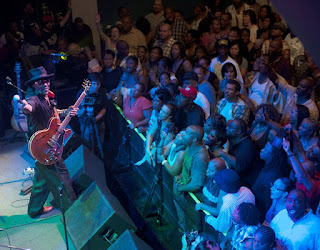 As the music and the movement continued to grow, birthing other local “stars” like Experience Unlimited (E.U.), Rare Essence, Little Benny and the Masters, and the Junkyard Band, some groups attempted to evolve in a quest to get a taste of the mainstream fame that probably drew them to pick up instruments as kids in the first place. There was just one problem: not many understood or embraced go-go outside of the D.C. area. It was the blessing and the curse: a curse for those artists who wanted more recognition; a blessing for those of us who didn’t want the world to take what was rightfully ours and turn it into nothing more than a “cash cow.” And so with flashes of national recognition here and there, much like the Prodigal Son, go-go always returned to its Godfather—and we couldn’t have been happier.

Times continued to change; the audiences got older; going to see a live go-go show or hear some around the city got a bit tougher (as, ironically, most local clubs will not allow it to be played due to the “high energy” it causes in its patrons), but we always knew that a trip down memory lane or a night of unadulterated partying was just a Chuck Brown show away. Even as Chuck grew older, venues continued to grow larger, and his name would share the marquee with such notable acts as Jill Scott, the Roots, and Erykah Badu. Whether playing the 9:30 club or the famed Howard Theater, shows would sell out in a matter of days, and now two and three generations of lifelong fans were shouting “Wind me up, Chuck” together. For when you’re at a Chuck Brown party, you never think the party—along with the beat—will end. Unfortunately, it came to an unexpected halt on May 16th. 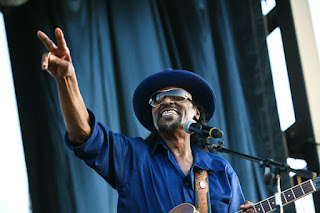 Posted by Erica Kennedy at 1:45 PM