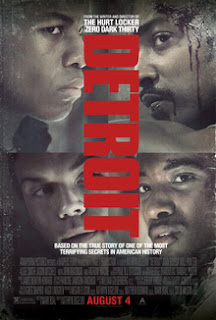 A few weeks ago while on travel, I decided to break up my busy day with a trip to the movies. I'm a regular moviegoer, but there's always something electrifying about taking in a flick away from home. It's like a further escape from your escape. My movie of choice: Detroit. Now, I will say, as much as I champion black cinema, I had no intention of seeing the much-anticipated film. After reading reviews and watching interviews, I just didn't think I could stomach seeing on screen what is continuing to be experienced by many young African-American men on a daily basis. But I dared myself to proceed and managed to make it through its 143-minute running time stoically, sans the few times I winced and shook my head during a few nerve-wracking moments. As the credits rolled, a few sat in reflection, while others attempted to collect themselves between sniffles. I, however, felt numb--until I exited the theater and, without any physical cues, the tears began to fall. It was like an unexpected punch in the gut. I surprised even myself and had no idea where the emotion had welled up from, having known the the history of the 1967 Detroit riot and being fully aware of what to expect on screen. But then I realized what was behind my tears: the realization that although some things have changed, so much has not.

I must admit, although sad, nothing about this past weekend was surprising to me, especially when the Free World is being led by a man whose very election platform was laced with racist rhetoric, lies, and unsubstantiated "facts." Honestly, I was more perplexed at those who were shocked he didn't take a stronger stance in denouncing the white supremacists and neo-Nazis who descended on the Virginia town to protest the pending removal of a statue of the Confederate's top leader--General Robert E. Lee. In fact, waiting for sincere outrage from Trump on this matter was akin to waiting for an atheist to deliver the Thanksgiving grace. Like really? However, what his lack of empathy could not distract from was the sad reality that three lives were lost--one directly, two indirectly--and the world was both outraged and saddened. Talking heads shared their remorse, late night talk show hosts offered monologues asking that Heather Heyer's death not be in vain, and people everywhere were saying it's time things change. And then I was forced to ponder a deeper question: Where in the hell have some of these people been?

There's no doubt that young Heather is indeed a martyr for the cause; she was protesting on the side of "right" as opposed to the Alt-Right, and had lived a brief life championing the cause for equality. However, from 1619 Jamestown to 1967 Detroit to now, African-Americans have been fighting, bleeding, and dying for this same equality; screaming in what feels like a silo, only to have it often fall on deaf ears and for the order of most American's days to continue on unbothered. Not saying that African-Americans have stood alone in their fight, but the latest outrage from those who usually remain silent makes me believe that even in mourning, there's segregation.

In solidarity of Saturday's tragic events, I was compelled to make a donation to the Go Fund Me campaign of Dre Harris, the young man who was captured on video being beaten with poles by white supremacists in a parking garage near the Charlottesville protest. His campaign was created to ask for assistance with medical bills, after having suffered a concussion, lacerations, broken wrist, broken teeth, and more. As of today, he has far exceeded his donation goal, which is a blessing since several contributors who worked in the medical field stated he was far underestimating what his costs would be, considering his injuries. But it didn't take long for the supportive words lining his campaign to be overshadowed by "jokingly" asking if he was really going to use the money for bills or would it be primarily used to buy weed. Two protesters fighting for justice; two victims in spite of their different endings. However, something tells me if Heather had been lucky enough to walk away from the tragedy with only injuries and was requesting assistance with medical bills, the outpouring of support would have been void of the sarcasm Dre received. For it seems even when we're victims, we're victims. And therein lies one of the biggest problems.

There's no doubt this country must do better with facing its ugly past and working toward a better future, and whatever it takes to "awaken" people--even tragedy--is never in vain. However, before white America considers the biggest enemy to be those across the protest line wearing Swastikas, wielding sticks and chains, and yelling racial slurs, it must consider its own ways it has contributed to this country's lack of progress in race relations, whether that's turning a blind eye to those protesters who stay on the front lines in the fight for equality, because they don't look like them, or in ignoring causes they feel don't speak to their "needs," or simply in the sarcastic humor offered in the face of tragedy. As the Rev. Dr. Martin Luther King Jr. so eloquently stated, "Injustice anywhere is a threat to justice everywhere." We may be on the same side of the protest line some of the time, but nothing will change if we're not of the same mindset all of the time.