Stop! In the Name of Love 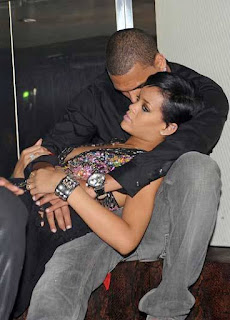 "What is this love thing all about?" --Martin Lawrence, Martin

Maybe better stated, what is their love thing all about? The couple in question: Pop music darlings Rihanna and Chris Brown. Their initial foray into “couplehood” made headlines; the punch that sent Rihanna sailing out of the relationship made even bigger headlines. Interviews abounded, declarations were made, restraining orders were put into place, and new love interests found their way into both of their lives. And then it was quiet—-until now. According to reports the two appear to be tweeting and texting their way back into each other's hearts and, possibly, each other's arms. Normally not a big deal when this involves young lovers or entertainment figures, except for the fact that this relationship and, thus, its tragic end, created proverbial lines drawn in the sand by many: domestic violence survivors, women interest groups, die-hard fans of Chris Breezy, faithful Rih Rih stans, and simply lovers of good music who didn’t care about any of it. And so a possible reignited flame between the two seems to have again heated everyone. But not me.

Before I go any further, I will say in no way am I condoning or diminishing the horrific effects of domestic violence. That alone is a topic for another blog. But not only was I not surprised at this rumored reuniting, I was actually waiting (not hoping) for it. Maybe it was the unconvincing way Rihanna spoke to Diane Sawyer during her first public interview and half-heartedly convinced us she had learned her lesson and was never going back. Maybe it was that in every fourth song Chris put out, there seemed to be some nod to Rihanna—and not in a bad way. Maybe it was the subtle, across-the-room glances photographers caught of them that read, “Oh, how I miss you….” Or maybe it was the leaked news of them chatting whenever they could steal away from the press and public. In any regards, lessons learned or not, these two have a love for each other that maybe even they can’t explain. Does it appear to be a healthy one? No. Is it something we can learn from? Yes.

Much like our own relationships—even when violence is not a factor—they end when and how we want them to. No amount of coaxing, talking, support, or even restraining orders have ever made a difference when two people want to be together. It only ends when one or both parties agree enough is enough. We’ve seen it with Ike and Tina. We’ve seen it with Whitney and Bobby. And we’re seeing it with Chris and Rihanna.

These relationships end when individual growth authentically happens (not when a publicist says it has) or when someone’s spirit desires something healthier and finds the courage to seek it. Until then, the only thing we can hope for—-and all learn from—-is that it’s personal growth that draws healthy, unconditional, supportive love into our lives that doesn’t hurt in any sense of the word; it's not our lip service. I’m not saying these two have not done their self work and, thus, re-discovered each other. If so, that's beautiful as everyone deserves a second chance when they've done the work to earn it. But if they haven’t, we can save our talk and work on ourselves instead.
Posted by Erica Kennedy at 5:09 PM